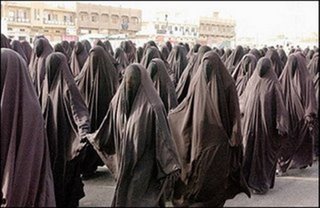 Italian PM to Muslim women ‘hidden’ behind veil: ‘You can’t cover your face …you must be seen’

By STEPHEN BROWN
The Toronto Star

ROME—Prime Minister Romano Prodi said yesterday that Muslim immigrant women should not be completely “hidden” behind full veils if they want to integrate and become part of Italy’s future. Prodi was asked about comments by senior British politician, Jack Straw, a former foreign secretary and leader of the House of Commons, who recently sparked vigorous debate in Britain by saying full veils made community relations “more difficult.”

“You can’t cover your face. If you have a veil, fine, but you must be seen,” Prodi said, adding: “This is common sense I think, it is important for our society. It is not how you dress but if you are hidden or not.” British Prime Minister Tony Blair also weighed in yesterday, calling the Muslim veil a “mark of separation and that’s why it makes other people from outside the community feel uncomfortable.”

Blair said he did not want to ban the veil. “I’m not saying anyone should be forced to do anything,” he told his monthly news conference. “No one wants to say that people don’t have the right to do it. That’s to take it too far. “But I think we do need to confront this issue about how we integrate people properly with our society and all the evidence is when people do integrate more they achieve more as well.”

Prodi, a centre-left leader, and former head of the European Commission, echoed controversial remarks made earlier this month by Straw. Straw said veils had acted as “a visible statement of separation and difference.”

Like Britain, Italy does not specifically restrict the wearing of the veil, but it has in the past had laws against covering your face in public for security reasons. France, however, has a law banning “conspicuous symbols” of faith such as Muslim headscarves, Jewish skullcaps and large Christian crosses, from schools. Prodi has angered the centre-right opposition, led by former premier Silvio Berlusconi, with an immigration policy that proposes to halve an application period for Italian citizenship to five years, in exchange for observation of Italian laws.

“The problem is to have clear rules, so that if they behave, if they respect the law, if they are good citizens, they can become Italian citizens,” Prodi said. Opinion polls show immigration is the top concern for voters on the centre-right in Italy, which was very narrowly defeated by Prodi in April’s elections.

But Prodi said it was “a problem not just for right-wing voters, it is a problem for everybody … because for the first time a country that was a country of emigration is a country receiving a wave of immigrants.”

But he contrasted his own policy with that of the Berlusconi government, a coalition that included the hard-right Northern League, which traditionally takes a tough stand on immigrants.”

The right-wing policy was to close their eyes and let immigrants come in, (but) be very restrictive in theory. My policy is let us guide immigration, guarantee immigrants their rights and try to be realistic about this flow of people.”

Italy and some of its southern European neighbours will propose a common EU immigration policy at a summit in Finland later this week, Prodi said, with a decision hopefully to be taken at a later summit in Brussels in December.

← Yasmin Alibhai-Brown in TIME Magazine: "It’s not illiberal for liberal societies to disapprove of the veil"
Niqabi Muslim women in the West, "Exhibitionist and Deluded" →