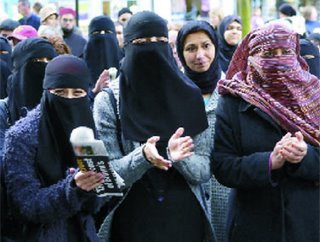 NEW YORK – The rumpus being created in the West by exhibitionist and deluded Muslim women, whose conduct flies in the face of clear Quranic injunctions and who confuse tribal customs with divine commandments is creating even more difficulties for ordinary, God-fearing Muslims than they already were struggling against.

The utterly uncalled for insistence on donning the hijab and, of late, wearing the niqab, an attire more suited to the profession of banditry than anything I can think of, belittles Islam in whose good name it is being done. No sensible person can disagree with British politician Jack Straw who ended up putting his head into a hive of very angry bees when he said that he found it hard to communicate with a person whose face he could not see.

Neither the hijab nor the niqab has anything to do with Islam, as anyone who has taken the trouble to read the right texts and who is not smitten by that arch priestess of ignorance Dr Farhat Hashmi and her ilk would know.

Dr Fazlur Rahman suggested that all Quranic passages, revealed as they were at a specific time in history and within certain general and particular circumstances, should be given expression relative to those circumstances.

Another Muslim scholar, Dr Ibrahim Syed, has written that those who claim that Quranic verses are explicit about hijab, base that position on Surah Al-Ahzab (33:59). The operative words in Arabic on which this interpretation is based mean that women should `lower their garments’ or `draw their garments closer to their bodies.’

Nowhere does the verse say that the face should be covered. Actually, the verse makes no mention of the word `face’ Hijab advocates often quote Surah Al-Nur (24:31) to back their position.

According to Dr Syed, “In the pre-Islamic period, women used to wear a cloth called khimar on their necks that was normally thrown towards the back, leaving the head and the chest exposed.

The reference in Al-Nur apparently instructs that this piece of cloth, normally worn on the head and neck, should be made to cover the bosom. So it is erroneous to conclude that the Quran demands (of) Muslim women to cover their heads.” Another Islamic scholar, Dr Abou el Fadl, says, “From the gross liberties taken in translating the (Quranic) text, apparently the translators believe that God wishes women to be like house-broken dogs – loyal, sweet and obedient.

One can only ponder what type of rotted and foul soul imagines that God wishes to imprison women in a sewer of squalid male egos, and suffer because men cannot control their libidos. What an ugly picture they have created of God’s compassion and mercy!” A Western scholar of Islam, Daphne Grace , writes that the veiling of women is nowhere explicitly prescribed in the Quran.

Another scholar, Fadwa El Guindi, has said that the original meaning of the Quranic verse was to “cover the cleavage of the breasts.” What the Quran forbade was the public flaunting of sexuality, with a parallel verse prescribing a modest dress code for men as well.

According to El Guindi, the original use of the veil was to distinguish the status and identity of the wives of the Holy Prophet (peace be upon him) “so that they may be recognised and not molested.” (The Quran, 33:59).

Fatima Mernissi, an Arab scholar, has written that the boundary between forbidden space, which is hidden by the hijab, and permitted space, became a key concept in the Islamic world, but “reducing or assimilating this concept to a scrap of cloth that men have imposed on women to veil them when they go out on the street is truly to impoverish this term, not to say drain it of its meaning.”

Yasmin Alibhai-Brown, the well-known London-based Muslim journalist, wrote in Time magazine on 16 October that it is “time to speak out against this objectionable garment and face down the obscurantists who endlessly bait and intimidate the state by making demands that violate its fundamental principles.

That they have brainwashed young women, born free, to seek self-subjugation breaks my heart. Trained creatures often choose to stay in their cages even when released. I don’t call that a choice. I would not propose that Muslim women should be stopped from wearing what they choose as they walk down the street, although, to be sure, there are practical problems with the niqab. I have seen Muslim women who had been appallingly beaten and forced to wear it to keep their wounds hidden. Veiled women cannot eat in restaurants, swim in the sea or smile at their babies in parks.”

The British-Muslim journalist supports the ban imposed by France on the hijab in public schools, noting that protests against the injunction soon died down and many Muslim French girls were happily released from a heritage that has no place in the modern world. Belgium, Denmark and Singapore have taken similar steps.

Noting that Britain has been both more relaxed about cultural differences and over-anxious about challenging unacceptable practices, she points out that few Britons have realised that the hijab – now more widespread than ever – is, for Islamicist puritans, “the first step on a path leading to the burqa, where even the eyes are gauzed over.”

She goes on to write, “I have interviewed young women who say they feel so wanton wearing only a headscarf that they will adopt the niqab. Now even 6-year-olds are put into hijabs.” She writes, “Western culture – it is true – is wildly sexualised and lacking in restraint. But there are ways to avoid falling into that pit without withdrawing into the darkness of a niqab. The robe is a physical manifestation of the pernicious idea of women as carriers of original sin; it assumes that the sight of a cheek or a lock of hair turns Muslim men into predators. The niqab rejects human commonalities.

The women who wear it want to observe fellow citizens, but remain unseen, as if they were CCTV cameras.” Alibhai-Brown writes that as a modern Muslim woman, she fasts and prays, but refuses to submit to the hijab or to an “opaque, black shroud.”

A Saudi Arabian woman lawyer said to her, “The Quran does not ask us to bury ourselves. We must be modest. These fools who are taking niqab will one day suffocate like I did, but they will not be allowed to leave the coffin.” Millions of progressive Muslims want to halt this Islamicist project to take us back to the Dark Ages, Alibhai-Brown warns. Islamism is a negation of Islam and it must be resisted wherever one comes across it.

It is being carried to ridiculous limits, for example, in Iraq’s Shia-controlled areas, where, according to a report in The Washington Post , long hair is banned because it makes men look feminine. Haircuts that are long on the sides and short on top, are forbidden because they are “Jewish” and Muslims are not allowed to “imitate Jews.”

There is “hair police” on the prowl, one of whom said that if someone is judged to have an improper hairstyle, “we will take him to the barber and we’ll ask the barber to cut his hair according to our regulations. If he refuses, we would send for his father or elder brother and tell them, `Either you take this measure or we’ll take the measure for you’.”

I think Iqbal, being the seer he was, got it right: Ye Ummat khurafat mein kho gayee (The body of the faithful got lost in delusions).

← Romano Prodi to veiled Muslim women: “You can’t cover your face … you must be seen”
The Radical Links of UK’s ‘Moderate’ Muslim Group →

1 comment for “Niqabi Muslim women in the West, "Exhibitionist and Deluded"”