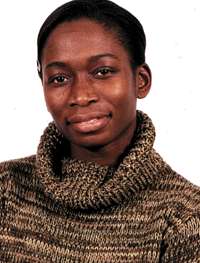 THE latest media darling of Scandinavian politics is not only black, beautiful and Muslim; she is also firmly against the wearing of the veil. Nyamko Sabuni, 37, has caused a storm as Sweden’s new integration and equality minister by arguing that all girls should be checked for evidence of female circumcision; arranged marriages should be criminalised; religious schools should receive no state funding; and immigrants should learn Swedish and find a job.

Supporters of the centre-right government that came to power last month believe that her bold rejection of cultural diversity may make her a force for change across Europe. Her critics are calling her a hardliner and even an Islamophobe.
“I am neither,” she said in an interview. “My aim is to integrate immigrants. One is to ensure they grow up just as any other child in Sweden would.”
Sabuni believes all immigrants must try to become proficient in Swedish — just as she did when she arrived from Africa aged 12 — rather than alienating locals.

“Language and jobs are the two most crucial things for integration,” she said. “If you want to become a Swedish citizen, we think you should have some basic knowledge of Swedish.”

An elegant, vivacious woman who uses subtle make-up and wears soft clothes in pastel shades and tight woollen sweaters, she argues for a total ban on veils being worn by girls under the age of consent, which is 15 in Sweden.
“Nowhere in the Koran does it state that a child should wear a veil; it stops them being children. By putting a veil on a girl you are immediately saying to the outside world that she is sexually mature and has to be covered. It’s wrong,” she said.
Sabuni was born in Burundi. Her father was a political dissident who was in prison during much of her early childhood. In 1980 he was granted asylum in Sweden. The next year his wife and six children joined him and they settled near Stockholm.
Sabuni read law at Uppsala University, Sweden’s equivalent of Oxbridge, and became a public relations consultant. Her husband, who works in the travel industry and runs their home in Stockholm, took paternity leave when their twin boys, now five, were born.

In Sweden she is best known for her suggestion that adolescent girls should have compulsory examinations to make sure they have not been subjected to genital mutilation. “It would enable us to prosecute people carrying out the practice,” she said.
According to Sabuni, many politicians have shied away from talking about the need for assimilation rather than multi-culturalism: “I am one of the few who dares to speak out. Sadly, some members of the Muslim community feel picked on.”

Muslim groups in Sweden are already organising a petition to have her removed from government. “I regret that Muslims feel I am a threat to them,” she said. “Everybody has a right to practise their religion, but I will never accept religious oppression. And I represent the whole of society, not just the Muslims.”

Despite her ascendancy in her adopted country, Sabuni says that Sweden, where immigrants — half of them Muslims — make up nearly 12% of the population, has been only moderately successful at integration: “We have a whole underclass of people who don’t have jobs, who don’t speak the language and who are living on the fringes of society.”

Although fighting discrimination is one of her stated aims, she effectively closed down a Centre Against Racism last week by withdrawing its £400,000 state funding. By chance, the centre was run by her uncle.

“It didn’t achieve its aims,” she said bluntly. “It simply didn’t do what it set out to do, so I had to pull the plug. My uncle is a good and a competent man, but a whole institute can’t be run by one man. He understands that I have to do my job.”

Other ministers appointed by Fredrik Reinfeldt, the prime minister, are more concerned about their jobs. Since he took over on September 17, two ministers have resigned in a series of minor scandals involving unpaid television licences and black-market domestic help, and two more are under pressure to go.

Should Reinfeldt’s government fall, Sabuni would be willing to step into his shoes. On a TV show three years ago she declared that she would become Sweden’s first female prime minister. “I stand by that,” she said. “It’s not something I think about on a daily basis but, if I’m in politics, the ultimate aim has to be to become prime minister.”

Anders Jonsson, a political commentator on the liberal newspaper Expressen, says there is no doubt Sabuni is one to watch. “She is a tough cookie and incredibly ambitious,” he said. “But I think it’s good that a black woman is raising these issues and she has proved that she is prepared to take tough decisions in order to get things done.”

← Sweden’s Muslim Minister of Integration to ban Niqab for girls under 15 years of age.
India’s leading Muslim cleric lashes out at Shabana Azmi after she slams the Burka →