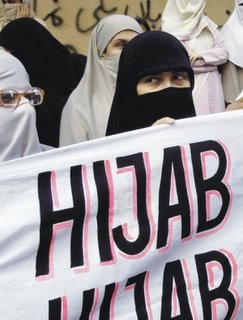 For years, I have vehemently opposed the politics of Jack Straw, a leading member of Tony Blair’s Cabinet and former British Foreign Secretary. He has backed the disastrous war in Iraq and domestic laws that curtail civil liberties.

In his north of England constituency, which has a sizable Muslim population, he panders to local Muslim bosses. But last week, in his local newspaper, Straw came out against the niqab, the full body and face veil worn by some Muslim women.

The niqab, Straw wrote, makes him uneasy and hampers communication. He now asks women — respectfully — to consider taking it off when they come to seek his help. I now find myself in the unusual position of agreeing with Straw’s every word.Feminists have denounced Straw’s approach as unacceptably proscriptive, and reactionary Muslims say it is Islamaphobic. But it is time to speak out against this objectionable garment and face down the obscurantists who endlessly bait and intimidate the state by making demands that violate its fundamental principles.

That they have brainwashed young women, born free, to seek self-subjugation breaks my heart. Trained creatures often choose to stay in their cages even when released. I don’t call that a choice.I would not propose that Muslim women should be stopped from wearing what they choose as they walk down the street, although, to be sure, there are practical problems with the niqab.

I have seen Muslim women who had been appallingly beaten and forced to wear it to keep their wounds hidden. Veiled women cannot eat in restaurants, swim in the sea or smile at their babies in parks.

But the most important reason for opposing the veil is one of principle. So long as it ensures genuinely equal standards for all, a liberal nation has no obligation to extend its liberalism to condone the most illiberal practices.

State institutions as well as private companies should have the right to stipulate that a person whose face cannot be seen need not be served. That would not discriminate against Muslims; it would, for example, also affect men whose faces were obscured by motorcycle helmets.

The principle expressed, in other words, would not be anti-Muslim, but one in favor of communication.The example of France is salutary here. In 2004, the government banned the hijab, the headscarf, in public schools. The policy may have been introduced with an air of insufferable Gallic superiority, but it was absolutely right; overtly religious symbols are divisive.

Schools and colleges should be places of social integration. Protests against the injunction soon died down and many Muslim French girls were happily released from a heritage that has no place in the modern world. Belgium, Denmark and Singapore have taken similar steps. Britain has been both more relaxed about cultural differences and over-anxious about challenging unacceptable practices.

Few Britons have realized that the hijab — now more widespread than ever — is, for Islamicist puritans, the first step on a path leading to the burqa, where even the eyes are gauzed over. I have interviewed young women who say they feel so wanton wearing only a headscarf that they will adopt the niqab. Now even 6-year-olds are put into hijabs.Western culture — it is true — is wildly sexualized and lacking in restraint. But there are ways to avoid falling into that pit without withdrawing into the darkness of a niqab. The robe is a physical manifestation of the pernicious idea of women as carriers of original sin; it assumes that the sight of a cheek or a lock of hair turns Muslim men into predators.

The niqab rejects human commonalities. The women who wear it want to observe fellow citizens, but remain unseen, as if they were cctv cameras.As a modern Muslim woman, I fast and pray; but I refuse to submit to the hijab or to an opaque, black shroud. On Sept. 10, 2001, I wrote a column in the Independent newspaper condemning the Taliban for using violence to force Afghan women into the burqa. It is happening again.

In Iran, educated women who fail some sort of veil test are being imprisoned by their oppressors. Saudi women under their body sheets long to show themselves and share the world equally with men.

Exiles who fled such practices to seek refuge in Europe now find the evil is following them. As a female lawyer from Saudi Arabia once said to me:

“The Koran does not ask us to bury ourselves. We must be modest. These fools who are taking niqab will one day suffocate like I did, but they will not be allowed to leave the coffin.”

Millions of progressive Muslims want to halt this Islamicist project to take us back to the Dark Ages. Straw is right to start a debate about what we wear.

← Prof. Mahfooz Kanwar: Niqabis are "brainwashed by their cultish male family members and those who are abused by their male custodians"
Romano Prodi to veiled Muslim women: “You can’t cover your face … you must be seen” →

5 comments for “Yasmin Alibhai-Brown in TIME Magazine: "It’s not illiberal for liberal societies to disapprove of the veil"”